Warning: count(): Parameter must be an array or an object that implements Countable in /home/customer/www/dianalampe.com.au/public_html/wp-content/plugins/custom-css-editor/bootstrap/pluginClass.php on line 132

Warning: Parameter 2 to azindex_posts_where() expected to be a reference, value given in /home/customer/www/dianalampe.com.au/public_html/wp-includes/class-wp-hook.php on line 307
 Anzac biscuits – Diana Lampe 
Warning: count(): Parameter must be an array or an object that implements Countable in /home/customer/www/dianalampe.com.au/public_html/wp-content/plugins/custom-css-editor/bootstrap/pluginClass.php on line 183 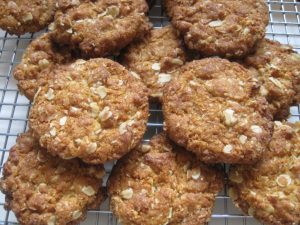 Both Australia and New Zealand share the tradition of Anzac biscuits. During World War 1 the women left at home made biscuits to send to the soldiers overseas. These were called soldiers’ biscuits at first, but became known as Anzac biscuits after the Gallipoli landing in 1915.

Anzac biscuit recipes are similar to much older recipes for rolled oat biscuits. They are crisp, hard and nutritious and also keep well. Some recipes contain dried fruit or nuts. The biscuits were packed in airtight tins to keep them crisp during the long sea voyage.

This Anzac biscuit recipe is from the Australian War Memorial and is an original recipe from Bob Lawson, an ANZAC who was present at the Gallipoli landing.

I like to make these popular biscuits every year on April 25 to commemorate ANZAC Day.

**Be sure to use the Australian standard 20ml tablespoon.

*Cut the sugar back to three quarters of a cup if you wish.